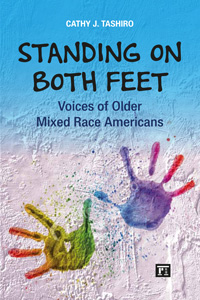 All of a sudden, I realized I was standing on two feet, and that I had been hopping around on one foot, back and forth, all my life. I didn’t know I was hopping until I got both feet on the ground at the same time. I said, ‘damn, this feels kind of good.’

When Fred Johnson was growing up in the 1940s, “standing on both feet” was a distant dream. According to the legal and social rules, Mr. Johnson, born to a white mother and African American father, was a Negro, putting him on the wrong side of the color line. Based on interviews with twenty people of mixed race, this book explores how life experiences and aging for people like Mr. Johnson shaped identity, thoughts, and feelings about race. Many books about mixed race people focus on adolescents and young adults, but to understand the meaning of mixed race now, we must understand what it meant in the past, because the legacy of those times still haunts us.

The people in this book are of mixed African American and mixed Asian American ancestries. Each had one white parent. Born between 1902 and 1951 when interracial marriage was still illegal in most parts of the United States, their very existence violated deep cultural beliefs in the distinctiveness of the races. Some of the most interesting stories in the book concern how their parents managed to circumvent the law to marry. Drawing on extensive interviews, this book explores mixed race identity and the significance of family experiences, aging and the life course, class, gender, and nation.

Cathy Tashiro has a knack for bringing out the most eloquent insides of her subjects. Almost all the writing about multiracial people has been about young adults and their identity-wonderings. This book tells an original and striking story of the lives of mature people of mixed race. First-rate!

This is a beautiful work, with a cross-disciplinary framework on ethnic and gender studies and scholarship on health and wellness. Students, academics, and readers concerned about humanity will love it.